A South Asian country, Bhutan shares its borders with China in the north and with India in the eastern, western and southern sides. Lying at the eastern end of the Himalayas, the ‘Kingdom of Bhutan’ is the perfect abode if you are looking for peace and fresh air.

More than two-third of the Bhutanese citizens follow Vajrayana Buddhism (also the state religion) and around one-third follow Hinduism, which is the second most dominant religion in Bhutan. People from all over the world come to visit the Bhutanese monasteries.

Bhutan has steep and high mountains crisscrossing by networks of swift rivers. The extra-ordinary geographical diversity and the diverse climate conditions play an important in contributing to Bhutan’s outstanding range of biodiversity and ecosystems, which are worth seeing. It is the only country in the world that is carbon negative, which means it produces more oxygen than it consumes. The constitution mandates the need to keep a minimum of 60 percent of country’s land area under forest cover for all times to come. 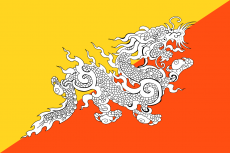 Bhutanese tradition is deeply steeped in its Buddhist heritage, be it the dress (The national dress for Bhutanese men, Kho and for women Kira), the language (Bhutanese or Dzongkha), the cultural activities (including masked dances, dance dramas accompanied by traditional music at festivals) or its national sport archery, which you may have a feel of when you visit Bhutan. Also, you may get to see a convention in Bhutanese families where inheritance is generally passed through the females rather than the males i.e. the daughters inherit their parents’ house and the man is expected to make his own way in the world and is asked to move to his wife’s home. Another distinct feature includes polygamy. Though rare, it is accepted in order to keep property in a contained family unit rather than dispersing it.